How to play MXF files on Mac with best MXF Player

How to play MXF files on Mac with best MXF Player?

1. What is MXF format

Material eXchange Format ( MXF ) is a open-standard container or a wrapper format for digital audio and video media defined by a set of standards defined by the Society of Motion Picture and Television Engineers ( SMPTE ). It has full timecode support and metadata support, which is the just the right feature of digital camcorders like Panasonic P2, Canon XF series to store the capturing videos.

As an improved format, MXF has the advanced workflows and more efficient working practices than are possible with mixed and proprietary file formats available these days. MXF files were designed to streamline workflows between different platforms, such as cameras, digital editing equipment, and servers. And Material eXchange Format ( MXF ) simplifies the integration of systems using MPEG and DV as well as yet unspecified, compression strategies.

2. How to play MXF files

MXF files cannot be accepted by Windows Media Player and Mac QuickTime naturally. If you wanna play MXF files, there are two basic ways to make it. One is to find a mxf player that can supports playing .mxf files as well as be compatible with the Mac or Windows OS. The other ways is to just convert the MXF files to corresponding formats to fit the local media player. 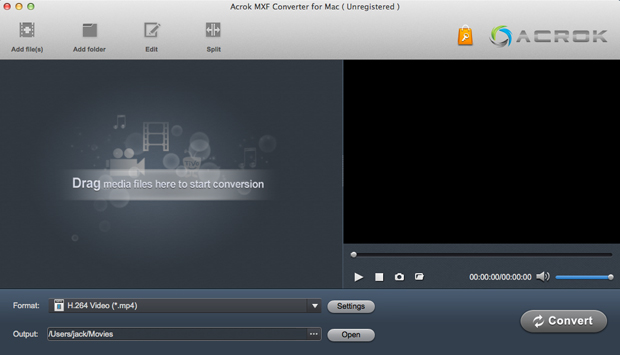 And MXF Video Converter has preset the optimized settings for the different output format and players. Users can feel free to specify the target files.

In conclusion, these two method can assist you play MXF files with ease. Just free download the MXF player program and have a try now.