How to put and play Blu-ray movies on Galaxy Tab S6?

As we all know there is no Blu-ray player for Galaxy Tab S6, Galaxy Tab S6 users need to download content via streaming media or the internet to play. Here we tested the best way to convert your Blu-rays to a format that your Galaxy Tab S6 can recognize.

I recently bought Samsung Galaxy Tab S6 for use while traveling etc. One of the main things I want to use it for is watching movies on flights – movies that are not normally playing on the plane. I’ve already downloaded some movies from Amazon Prime. But I also own movies on Blu-ray. I was wondering now I might go about getting a Blu-ray movie onto Galaxy Tab S6 to play it. I have an external dvd reader and a usb to lightening connector. But what program would I use to import the Blu-ray files into the Galaxy Tab S6?

You want the very best Android tablet and you’re not worried about how much you’ll be spending? The Samsung Galaxy Tab S6 is undeniably the best product you’ll find with a plethora of cutting-edge features. The 10.5-inch AMOLED display on the Galaxy Tab S6 is one of the highlights with an impressive resolution of 1600 x 2560. This tablet also comes with two cameras on the rear too, so you can get better photography than on other slates.

If you have an extensive collection of Blu-ray’s lying around, you might be wondering how you can watch them all on your Samsung Galaxy TAb S6. There’s nothing quite like watching a movie whilst travelling or when away from home, and the experience can be even better than playing a physical Blu-ray because movies start instantly on Galaxy Tab S6. The Galaxy Tab S6 is an especially good video playback device due to the large screen size and hi-resolution display. HD movies play brilliantly, and it’s possible to transfer quite a number of films to the Galaxy Tab S6 – depending upon the storage capacity you have available.

This article describes the basics of how to watch movies on your Galaxy Tab S6.

The general process of getting a Blu-ray video onto your Galaxy Tab S6 is:

There are numerous apps that can help you with the conversion process from Blu-ray to Samsung Galaxy Tab S6. Some of these apps are relatively complicated, but there is a dedicated software from Acrok with straightforward settings and simple interfaces. Note that many such apps refuse to convert copy-protected Blu-ray’s, but there are usually upgrades or patches available which can get around these limitations. Please be aware of copyright laws and make sure that you don’t infringe anybody’s copyright!

By far the best option is to obtain some software which can copy the Blu-ray and convert to the correct audio and video formats for Galaxy Tab S6, rather than more traditional conversion which is limited to files – in that case, you’ll need a separate app to copy the movie files off the Blu-ray to your PC and another to convert them to the correct multimedia format to play on the Galaxy Tab S6.

Acrok Video Converter Ultimate has a simple interface which makes it a doddle to convert a Blu-ray. There are lots of built-in presets which are already setup for the target device you want to play on. There are also options to manually tweak the output formats and bit-rates and a choice of multimedia formats to get the optimal settings. For example, you might want to use a higher quality setting if you feel that the presets aren’t good enough. Acrok Blu-ray to Galaxy Tab S6 Converter is also one of the cheaper Blu-ray ripping apps. Once you’ve copied and converted a Blu-ray, you’ll have to copy and transfer the movies to your Galaxy Tab S6. 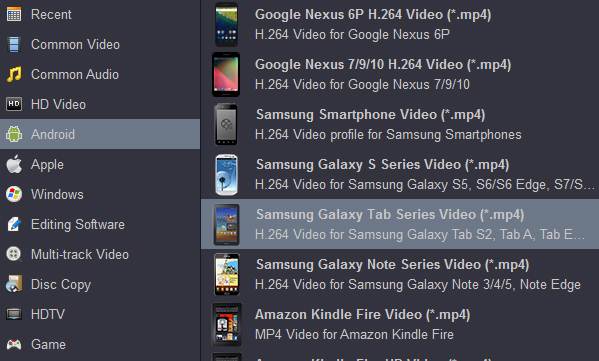